The fact that I don't have an old brown recliner is probably my saving grace.  I really feel like people who self-combust always leave wisps of smoke from a charred still-rocking brown recliner.  So there's that.

But anyway, work is nuts.  I have to put together a two-day workshop at work for 30 people plus some other people who will be joining remotely.  This includes:

Wish me luck.  I'll come up to breathe sometime next week.
Posted by Eliska at 7:12 PM 4 comments:

I love a great-grandma doing the Dougie

I killed my camera.  In a Epsom salt foot bath in Montana.  Mr. Renaissance tried to save it in a rubbing alcohol solution, and now it turns on, but that's about it.  D.E.A.D. 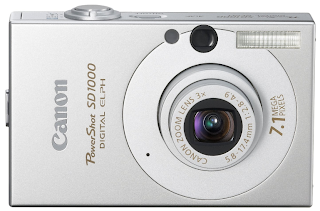 I can't figure out how I should replace it.  You see, I also have this waterproof housing for it, which I think only fits the Canon Powershot SD1000. 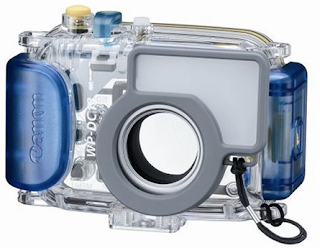 So my first option is to buy the exact same camera used for $90.  Not super exciting, but I know how to use it and I'll still have the waterproof housing (which in my current lifestyle I don't really use all that much I'll admit).


The second option is to buy a new updated Canon Elph.  But there are sooooo many options.  It's getting confusing. 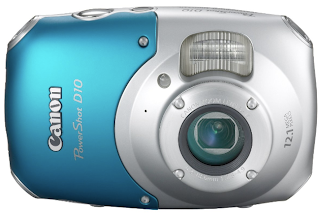 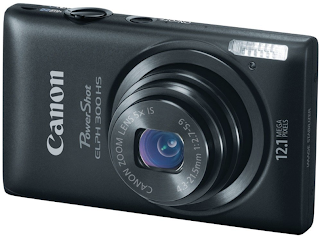 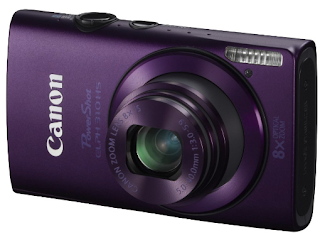 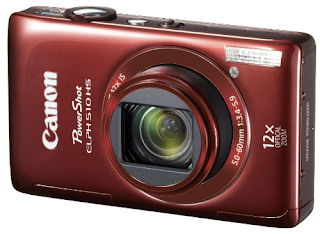 OR, I could buy a fancier camera - NOT a DSL, I'm not ready for that, but something more that direction... 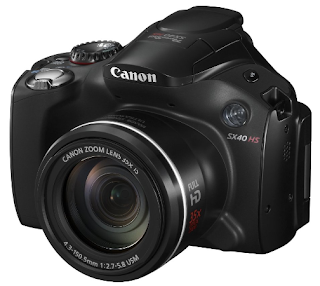 Here's what I want -
Here are all the options at Canon.
Please help me!
Posted by Eliska at 3:10 PM 3 comments:

Right this second, about 10 seconds ago, I just found out that not only does Mr. Renaissance still use Windows Media Player, but he also uses Internet Explorer.  Funny, he didn't email me from a hotmail account! 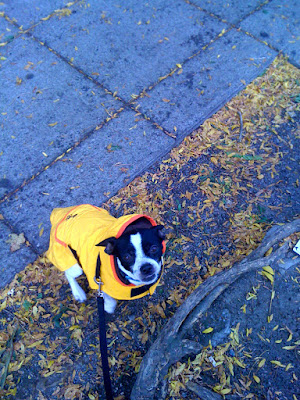 Aside from the adorableness of dogs in clothes, I'm a little conflicted about the change in weather.  There are a few things that are necessary for me to psychologically survive 9 months of grey/rain/darkness: a fireplace; a hot tub; a cuddly/adorable/sweet significant other; lots and lots of books; and cooking, a lot of cooking.  A tropical getaway is also a bonus.  Luckily for me, aside from the hot tub (and that plan is in the works), I've got all of those things going for me.  I still need to settle the firewood situation, but I have definitely started out the grey season with a lot of reading in bed, and a lot of hermiting.

I do have a lot of books to read.  If you ever want to know how to get your hands on thousands of good books for super cheap, come talk to me.  Ah hell, I'll tell you right now.


Anyway, it may have become clear from the above treatise on book buying that I've got a lot of books to get through.  There will be a lot of reading in bed this winter.  One of these days when I have a cozy house, there will be a lot of reading in other parts of the house as well.
And while I'll be spending my winter reading and cooking and trying to keep psychologically and physically warm, the love that has zipped into my life at warp speeds and who here we call Mr. Renaissance has a much bigger project.  Which he has now started officially documenting.  I'll be supportive and lend a hand when I can, but when the jobs consist of pile driving and jack hammering and shoveling dirt, well let's just say my talents likely lie more in making dinner back here.  The days of emotional support from a sunny hammock spot are no longer weather-permitted.
Posted by Eliska at 6:17 PM No comments:

Where were we?  Oh, right.  Montana.  So The Wanderer and I decided that we were going to take the dogs backpacking - which was why I flew Bubba out there.  We went to the Beartooth Mountains - just north of Yellowstone. 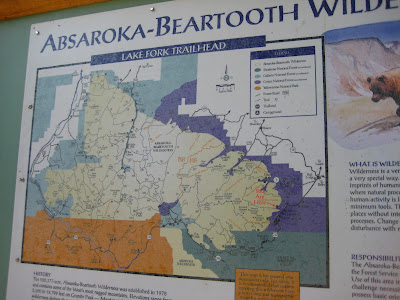 We decided to go to Lost Lake specifically.  The plan was to hike to Lost Lake, camp there, and hike back. 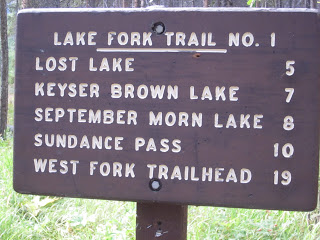 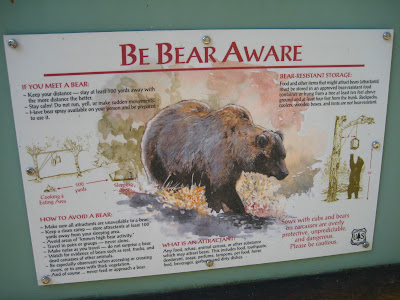 Then we headed out.
So because it was bear country with a side of mountain lion, I wasn't sure if I was going to let Bubba off leash at all.  But it was so wide open at first and I could see pretty far.  So I let Bubba off leash but I made him stick much closer to me than I normally would on a hike.  He did really well.  For a while he was literally on my heels.  Maybe he smelled bear. 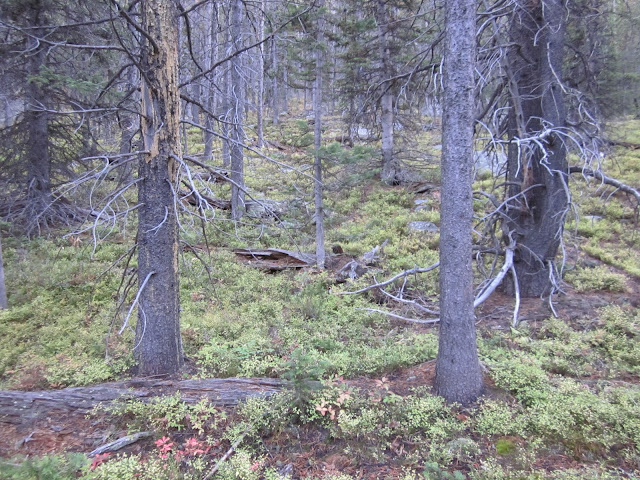 When we're hiking and I am the last person, Bubba always checks up on me.  If he thinks I'm falling too far behind, he'll just stand there and wait for me to catch up before he'll continue walking.  It's so sweet. 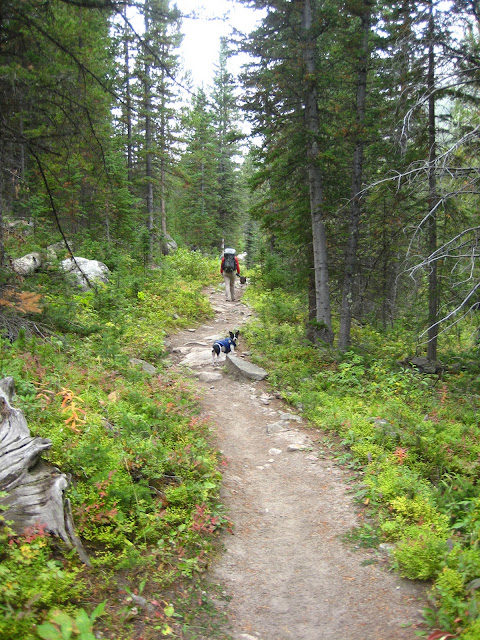 After a thunderstorm that rolled in unexpectedly caused us to set up camp a bit early, we continued walking to Lost Lake.  Here it is! 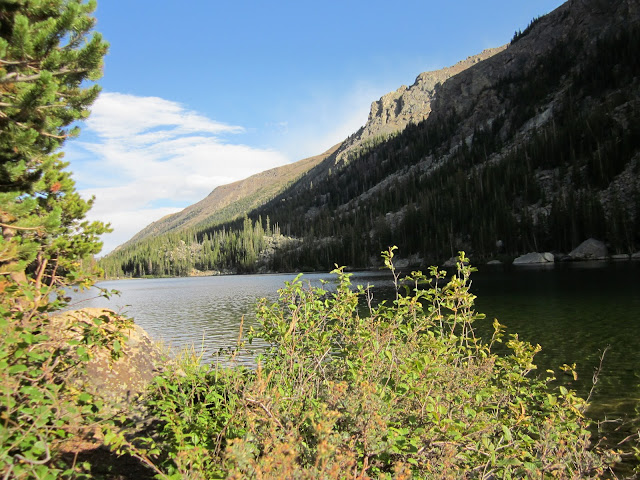 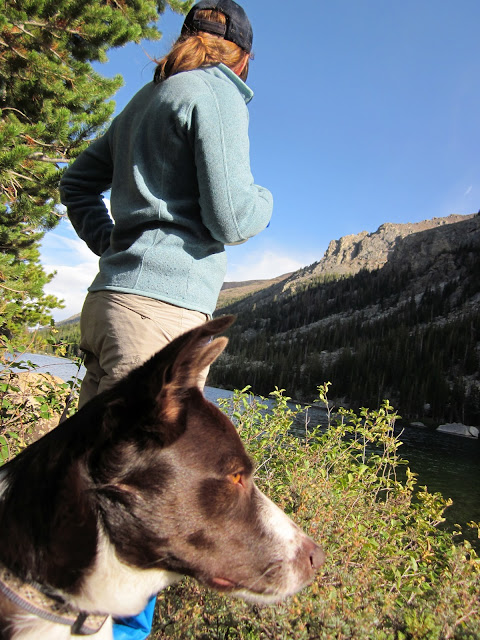 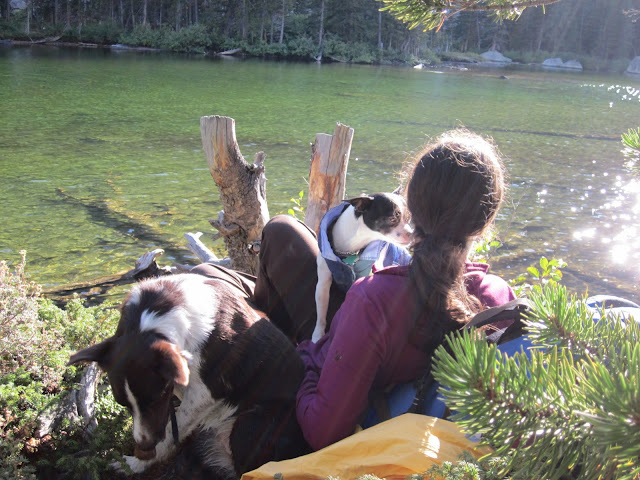 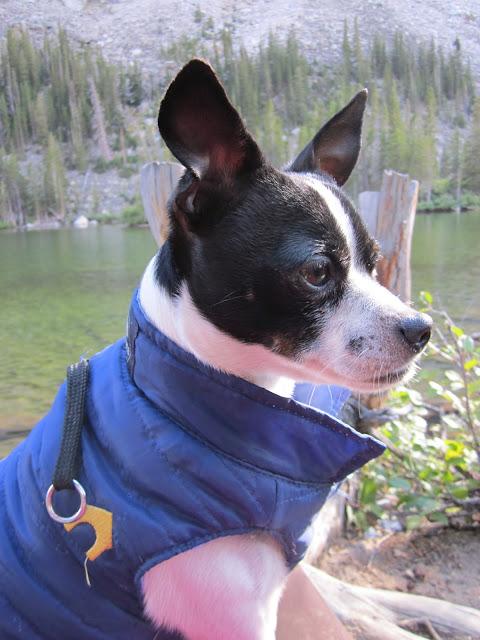 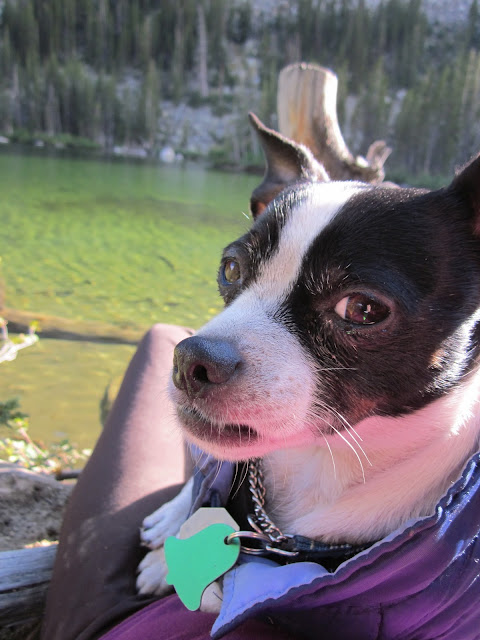 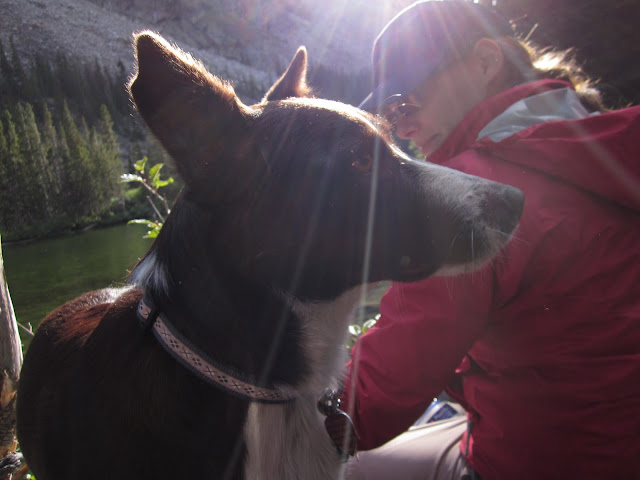 Bubba was ready for a nap so he weaseled his way into a cuddle. 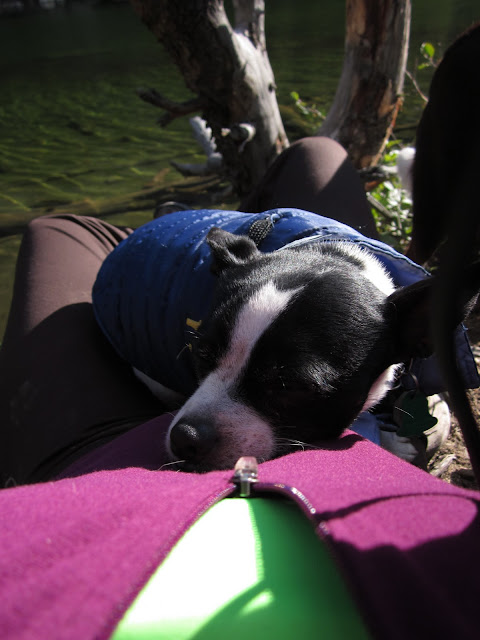 Then we walked back to our camp spot by the river. 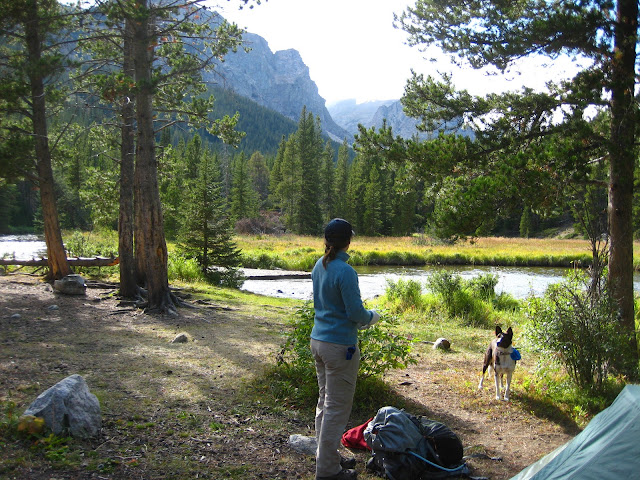 And Bubba was ready to relax.


Oh!  And then I noticed these weird blood red circle spots on his belly.  They were bright red with a tiny black dot in the center.  It was so strange.  The next day they were a red ring.  Too fast to be ringworm, and no tick attached.  When we got back I called the vet and they said just some weird bug bite.  Don't worry about it. 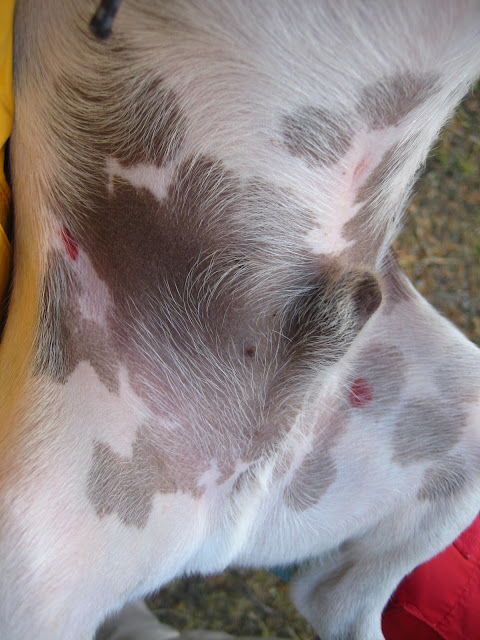 So The Wanderer and I made dinner (not super awesome I'll be honest), chugged down some wine (awesome), and had some chocolate for dessert.  Sat in front of the fire we made for a minute, and then had to get the bear bag up in the trees quick.  We were losing light.

It went fine, but on the way back to camp my headlight lit up these eyes. 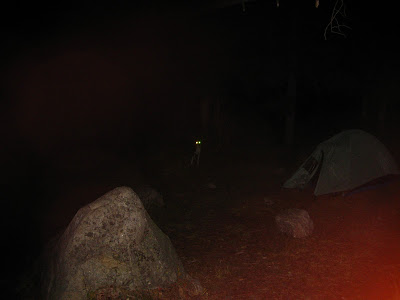 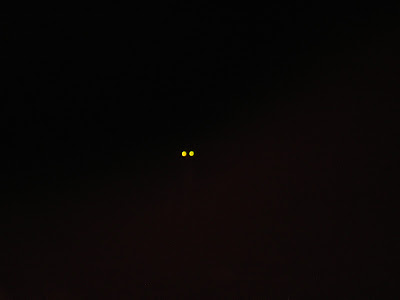 I knew Caddie was back there tied to a tree, and it only made sense that it was her, but still.  Eerie.  Pitch black night, two pair of eyes shining back at you.
The next morning we all woke up safe and sound. 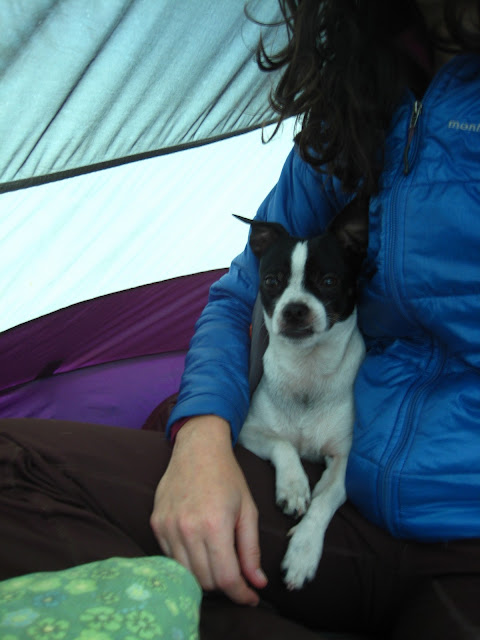 It was a lot colder than it was supposed to be that weekend.  50-60s during the day and 30s at night.  I recently bought a new much warmer down sleeping bag on the Middleman's recommendation, and boy was that thing warm.  I had my arms completely out of the bag most of the night.  That thing is stellar.
And Bubba was warm too... at night.  And while hiking.  But in the evening and the morning when he wasn't moving around too much, his jacket just wasn't cutting it.  So I wrapped him up in down and hoped he'd stay that way while we made breakfast. 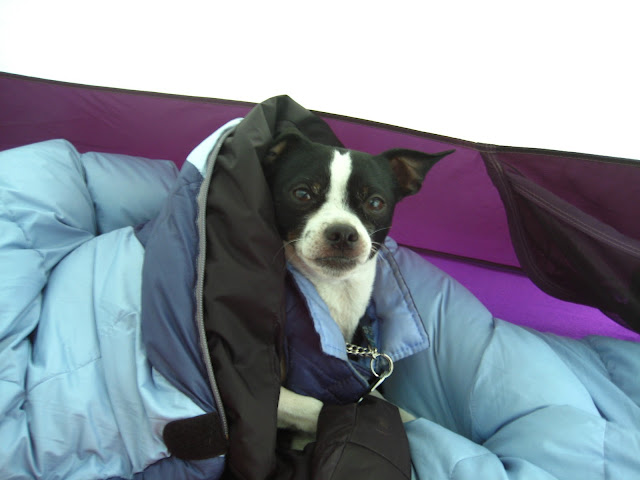 Then I went out on some rocks in the river to brush my teeth.  He followed me, as usual, but only about this far. 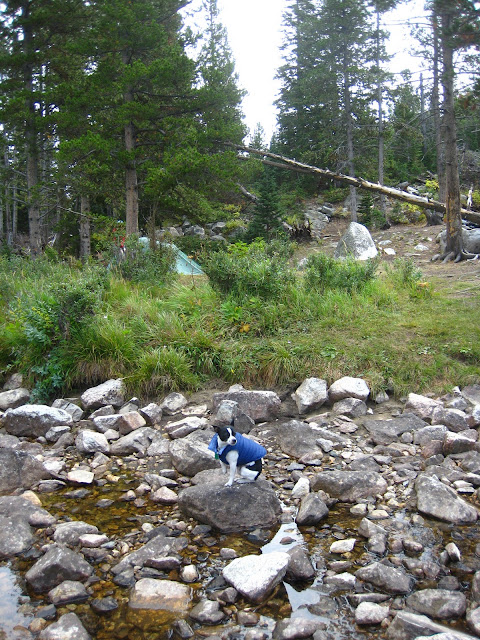 Little dude hates water.
And once the tent was down, he had to find himself another bed.  The best choice was The Wanderer's backpack, apparently.  Good luck getting him off there so you can pack it. 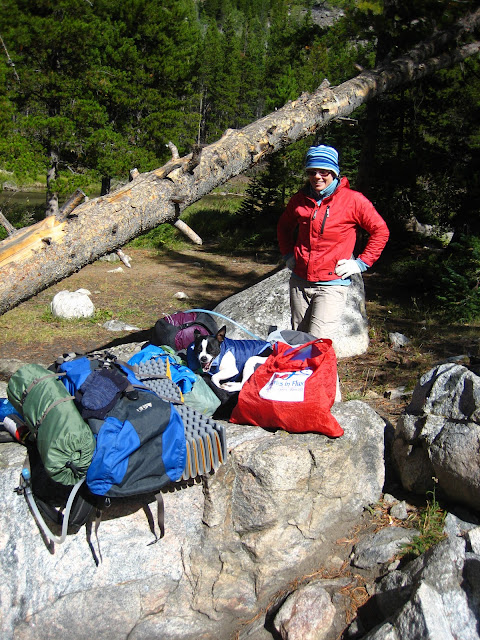 We hiked back to the car, opened the doors, one second later Bubba jumped in, and then they got some treats. 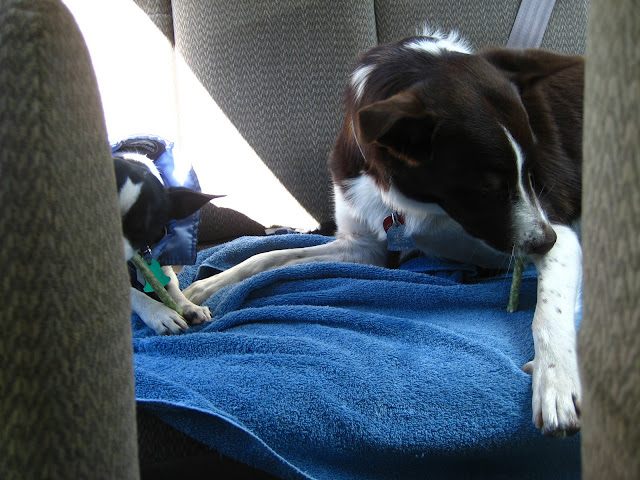 Tired dogs, avoided getting soaked by rain, warm enough sleeping bags and clothes, some pretty sunny days, no bear/cougar encounters, not getting lost, and no injuries.  It was pretty successful all around.
Posted by Eliska at 6:46 PM No comments: